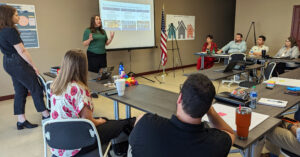 The future is digital. One of the most significant ways to grow an economy and create jobs and wealth is to be a part of this digital revolution and encourage the creation of scalable tech startups. However, there is a bias against rural America. Rural America accounts for 13% of the nation’s workforce, but only 5% of tech jobs. This disparity has a negative impact on rural communities.

This is why the Ada Jobs Foundation is working to support the creation of scalable tech startups. These types of businesses can provide local wealth, jobs, as well as a better standard of living for the community as a whole. Scalable tech startups often benefit from “incubator” programs that provide support for a company during the early stages of a company’s formation. While incubator programs are a common and widely-accepted form of support for these startup companies, the Ada Jobs Foundation recognized that creating a great and sustainable incubator program would require a plan and a strategic approach.

On September 6, 2022, the staff at Ada Jobs Foundation was joined by two entrepreneurship specialists from Rural Innovation Strategies, Inc., a sister organization to the Center on Rural Innovation. Molly Pyle, Head of Entrepreneurship, and Rose Vieland, Entrepreneurship Programs Specialist, came to Ada in order to help the Ada Jobs Foundation realize their goals of having a successful startup technology incubator in our area, which would be a necessary component to supporting scalable tech startups. Over the course of three days, Pyle and Vieland led an Incubator Feasibility Study. Their approach embraced a community-driven and highly engaged process, including multiple focus groups, workshops, and opportunity to interact with Ada’s entrepreneurs, leaders, and community members. The purpose of all of these meetings was to determine the best plan of action for our community.

Daniel Casteñada, Economic Development Specialist for the Ada Jobs Foundation, spearheaded this effort to bring Pyle and Vieland to Ada for this study. It is important, Casteñada says, because, “It helps us assess what kind of programming will be most beneficial to entrepreneurs in the region.” Through the workshops and focus groups, these two specialists were able to get a broad understanding of the existing ecosystem for tech-based entrepreneurship in Ada while also determining what needs to be done in order to ensure that our efforts are successful. While they were in Ada, they were able to gain a wealth of information. They toured possible sites that could be used to house different types of incubators and co-working spaces. They met with local leaders in an in-depth workshop intended to deeply delve into the community’s resources, needs, and desires. They led small, specific focus groups to gain feedback in the areas of water technologies, entrepreneurship, mentorship, and investment opportunities.

The workshop on the second day of their visit was particularly enlightening for all involved. It lasted four hours and was attended by a variety of community stakeholders, including representatives from LegalShield, Pontotoc Technology Center, East Central University, the Chickasaw Nation, and the Ada Jobs Foundation as well as others. Through the course of the workshop, attendees were asked to think about who could benefit from a tech incubator and what the specific challenges would be. However, they were also asked to brainstorm about ways to provide solutions to these problems. In the end, the organizers took the attendees through the four main phases of scalable tech entrepreneurship.

The first phase, Phase 0, was the “Foundation Stage” where they assessed what basic support exists in the community. Phase 1, the “Idea Stage”, focused on inspiration, education, and validation for future entrepreneurs. Phase 2 was the “Launch Stage” where entrepreneurs could begin to launch their ventures and start making connections within the community. Finally, in Phase 3, the “Growth Stage”, entrepreneurs would have the resources to scale their venture. All of this leads to the outcome that Ada Jobs Foundation, as well as many other members of the community, ultimately desire: the creation of jobs and wealth. As Pyle stated in the presentation, these outcomes encompass three things, “A thriving culture and ecosystem of scalable tech entrepreneurship, sustaining and supporting the ideation, launch and scaling of new ventures.”

Through this visioning, the participants, as well as the organizers, were able to really see what resources already exist in our community, those which can be strengthened, and those which need to be created. It was eye opening to see that, even though we have tasks ahead of us to accomplish our goals, we do have a strong existing foundation that can be built upon. And this entire process—the tour, the workshop, and the focus groups—will help Pyle and Vieland to create a strategy and procedure for our community to realize our goals.

The creation of a tech startup incubator in Ada could have a far-reaching effect that goes beyond just the participants. In addition to helping create new jobs and ways to create wealth, a startup incubator also creates opportunities for people to stay in Ada. College graduates wouldn’t feel like they had to leave the area in order to have successful and productive careers in technology. These jobs would exist here, or the framework would be available for these individuals to create the jobs that they want. In addition to these outcomes, it could also generate tax revenue to help our city grow stronger, revitalize our neighborhoods, and empower women, minorities, and low-income individuals to create their own destinies.

The next steps in this process will include a virtual presentation and the creation of a finalized document. The Ada Jobs Foundation will bring the results of this study to the Ada Rural Innovation Action Team, a group of community entrepreneurs and startup champions, to work on bringing the recommendations from into a plan of action. Ultimately, the Ada Jobs Foundation hopes to see the creation of an incubator serving Ada and the Southern Oklahoma region, where entrepreneurs can find the help they need, a space that will allow them to grow new companies, and an opportunity to change the world from the heart of Ada.