The Fire Station: Historic Ada Moves into the Future of Innovation 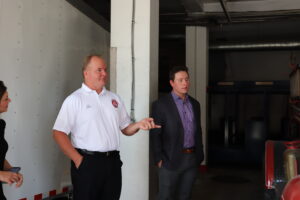 If you were driving down Broadway in Ada on August 3, 2022, you might have noticed a large group of people congregating inside the historic Central Fire Station, looking around, talking to each other, despite the rising heat of the day. What you most likely didn’t know, though, was that this was a meeting of Ada Jobs Foundation staff, the city manager and staff, officials from the USDA, including the state director Kenneth Corn, and representatives from Senators Lankford and Inhofe as well as those from Representative Cole. Instead of talking about putting out fires, the group assembled in the former fire station that day to learn about the USDA RISE (Rural Innovation Stronger Economy) Grant award that is being used to transform Ada’s former fire station into an Innovation Center that will help support entrepreneurs, water innovation, and a new generation of tech workers as they transform Ada’s economy into the future, right from the center of the community.

Ada’s USDA RISE Grant award was built on a number of local partnerships. In June of 2021, the Ada Jobs Foundation received an email from Christy Idleman at Oklahoma Gas and Electric describing a new grant program called Rural Innovation Stronger Economy (RISE) provided by the USDA. She said this grant would be “perfect” for Ada, as the Ada Jobs Foundation had been working for several years through the economic development partnership with the City of Ada to launch a more innovation and entrepreneurship-focused approach to economic development.

The RISE Grant opportunity was designed in a unique way by requiring a partnership between at least two entities. In the case of Ada’s RISE Grant award, the City of Ada was the primary applicant and owner of the building that would be renovated with grant funds. The Ada Jobs Foundation, a 501(c)3 nonprofit economic development organization, was designated as the primary partner with expertise in economic development, workforce, and entrepreneurship support programs.

There had been an ongoing conversation between the Ada Jobs Foundation and the City of Ada to transform the historic Central Fire Station into an Innovation Hub that could serve Ada’s Entrepreneurs. The space was also identified as a potential site to house the innovation and commercialization activity of a new Water Innovation Cluster effort that would build on existing partnerships with the Chickasaw Nation, Oka’ Institute at East Central University, and the Environmental Protection Agency’s Kerr Environmental Research Center. There was a great need to create a “front door” in the region for entrepreneurship, water innovation, and space for classes that would help support these efforts through new digital skill training.

The historic Central Fire Station in Ada was originally built in 1908 and served as the location of both City Hall as well as the Fire Department. The Fire Department remained in the building for over 100 years until 2017, when they moved to newly constructed and modern fire station built through a local sales tax initiative. Through the course of the century, there were many updates made to the facility. Fire Chief Rob Johnson noted, in particular, that the doors had to be resized multiple times because as the decades marched on, the size of fire engines grew, and so the building had to grow with it. Now, after sitting empty for four years, the building has a chance to grow again, though this time to help prepare Ada’s economy for the next century of technology, innovation, and new companies.

In order for Ada’s entrepreneurs to thrive, there must be physical spaces for entrepreneurship. There need to be places for people to work and interact with each other. According to the Center on Rural Innovation, co-working and entrepreneurship spaces are necessary infrastructure for building a successful digital economy. The RISE grant provides the funds to secure this possibility for our community. The project provides nearly $650,000 in order to renovate the first floor of the fire station, secure the structure, and complete an innovation center. This can provide co-working space and office space as well as room for classrooms, accelerators, and incubators. Kenneth Corn, USDA State Director, applauds Ada for taking these steps. Corn says:

The significant forethought of developing space for innovation and advancement of economic opportunities put Ada as a leader in the new trends in building sustainable economic growth.  RISE grant used as a resource with the Ada Jobs Foundation positions the area uniquely in the highly competitive area of economic development by developing space that provides options for those emerging opportunities that create real wealth and job growth.

While physical space is a necessary component for building a successful digital economy, it also leads to one of the direct drivers of innovation—scalable tech entrepreneur support and incubation. According to the Center on Rural Innovation, direct drivers are, “the elements that enable communities to successfully compete in the tech economy.” By having this physical space, there is also room to support entrepreneurs, help them develop their ideas, and connect them to mentors and investors with networking events. 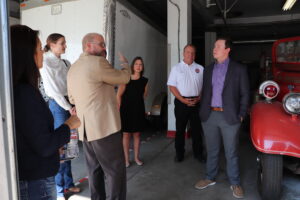 This is an important step towards building an ecosystem for innovation in our area and can have a positive impact on our community. According to Ada City Manager, Cody Holcomb, “This will allow people to come together and share ideas, support each other, and build a robust tech culture that will benefit our entire community. This is why re-purposing the fire station is crucial to bringing our economy into the digital age.” The end result of supporting a burgeoning digital economy, and the reason why this is so important, is because in the end it can lead to good jobs in the areas of innovation as well as increased local wealth. These new jobs and increased wealth will benefit not just those who are creating these new ventures, but also the community at large. When there is more wealth, there is more spending which affects all of our local businesses as well as increasing the tax base and allowing Ada to flourish.

In late 2021, Ada was named as one of only eleven communities across the country to be awarded this particular grant. The grant awarded to the City of Ada will be used to transform the historic Central Fire Station into a new space for business incubation, co-working spaces, classroom space for entrepreneurship workshops, among many other possibilities. Where the fire station was once used to fight fires around town, now it will be used to light the fires of imagination and entrepreneurship, fanning the flames of growth in our community. We are stronger when we work together, but we have to have a place for us to accomplish this. The historic Central Fire Station gives our community this opportunity. Together we can build a stronger Ada; together we can rise.