Naresh Juneja: Innovating with a Breath of Fresh Air 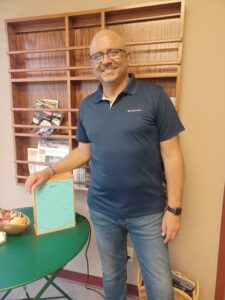 Naresh Juneja never intended to make Ada, Oklahoma his home. In fact, until his wife, Hursh, took a job with the Chickasaw Nation as Head of Enterprise Architecture and Innovation, IT, they had never even heard of Ada. However, it was a decision that would have long lasting implications in his life as he would discover more about himself, the value of community, and begin his own journey into technological entrepreneurship.

Though Juneja was new to Ada, he was not new to small town life. He was born and raised in Bokaro, India, a small town located between two coal mines. His town was home to an explosive factory that made nitroglycerin-based explosives for the coalmines. His father was the senior foreman for the factory when it was built by a British company in 1957—ten years after his parents lost everything fleeing Pakistan when it separated from India. After living in a refugee camp and rebuilding their lives in a new place, his father, who had worked very hard to become educated, was offered the opportunity to run the explosive factory. Education and hard work were of the greatest importance to his father, so when it was time for Juneja to choose his path, his father gave him three choices. Juneja says, “I asked him what my three choices were, and he said I could become a doctor, I could become an engineer, or I could leave home and go into whatever I wanted.” Essentially, it came down to only two choices. So Juneja, who had an aptitude in math, decided to become an engineer.

He pursued his schooling in India, met his wife and married, and then they both were accepted into the Asian Institute of Technology in Bangkok, Thailand. This is a program funded by different world governments. Juneja was sponsored by the Dutch government and his wife was sponsored by the Norwegian government. He did his studies in industrial engineering and management and then, in 1999, they moved to the bay area of California where his wife worked for Oracle. They lived there for about five years before moving to Atlanta with their two small children. When they were in Atlanta, Juneja bought a gas station, but the commute was 120 miles round trip, and that kind of life was not sustainable. He got into day trading and learned from experts in Chicago, but he wasn’t really enjoying it that much. When they came to Ada, though, his thoughts went back into manufacturing, prompted by something that affected us all: the Covid-19 Pandemic.

When speaking with Juneja, one thing is completely clear: he has a thirst for knowledge and isn’t afraid to learn and try new things. This had taken him through many paths in his life—engineering, entrepreneurship, day trading—but now, living through a pandemic, he realized that going back to his roots of engineering could do some good for other people. In the beginning, it was abundantly clear that more ventilators were needed so he thought about manufacturing them. He did a lot of research and even prepared the designs. However, he realized that regulatory requirements would make it a very long process and difficult to get approved quickly and easily. However, this did get him thinking about air and air quality. He says, “We realized that air quality would be an issue going forward because it had already been proven that the spread of the Coronavirus was because of indoor air quality and not because of surfaces.”

Air purifiers were already starting to gain momentum in the market, but most of them were either poorly made or very expensive. According to Juneja, the purifiers that worked well could run anywhere from $300-$1,500, and, while you could find some for $50, they did not work as they should. He wanted to find a way to make an air purifier that anyone could buy in order to help keep them safe.

He started with a redesign of a product available in India which had been designed by his nephew, Krrish Chawla. It was important to Juneja that no glues or other chemicals were used in the construction of his air purifier. He also didn’t see the need for other features not related to air purification. Because the purifiers are made using 3-D printing instead of expensive injection molds, Juneja was able to keep the cost under $150, and this allows him to pitch his product as offering superior filtration compared to other lower-priced air purifiers on the market.

While he wanted to give people a product that would make their homes and offices safer—not just against the Coronavirus but also all the other pollutants and irritants we are exposed to daily—this was not a simple journey. When he decided to try out 3-D printing, he had never had any experience with this technology and wasn’t sure where to begin. However, Jim Lawson at Pontotoc Technology Center taught him about 3-D printing at the Pontotoc Technology Fab Lab and helped him figure out how to refine and improve how the puffier would be printed. He also had mentors in Seattle and Connecticut that helped him with his design. Through Juneja’s ingenuity and the help of community, he was able to modify his 3-D printing machines to increase production from making a single part in 48 hours to being able to manufacture 300 total machines in a month.

Having a good machine, though, wasn’t enough to start a business. He says, “Nobody grows a business alone. I have a community which helped me. Until you have a community you don’t grow.” And Juneja is very thankful to the community that helped support him. Jim Lawson helped him with 3-D printing resources and others at Pontotoc Technology Center helped him by looking at his designs as a focus group; Jim Eldridge with Ada Jobs Foundation helped Juneja grow his business and refine those ideas. Because of the support he has received from the community, Juneja wants nothing more than to give back. He says, “I work very hard trying to document everything, so others don’t have to struggle with marketing. They don’t have to struggle with funding.” While Juneja has had mentors helping him, he wants to mentor and help future tech entrepreneurs so that their journey can be easier than his.

When asked what advice he has for future innovators, Juneja states clearly, “When you have something you believe in, just do it and ask for help. There are a lot of people who want to help, but not until you ask. If you ask for help with a clear conscience, it will always come. If I had not asked for help, I wouldn’t be where I am now.” Ada has been a blessing to Juneja, not only because he has had a chance to make it his home and start his business here, but because he has seen how supportive a rural community can be. He says, “I’m very thankful that God gave me this opportunity and brought me here. I’m very thankful that happened, otherwise I would have just lived in big cities and not even known that there is a different world which is probably more human.” For Juneja, the fresh air is about more than purifiers, it is seeing firsthand how community can come together and how, if you just ask, they are willing to help.