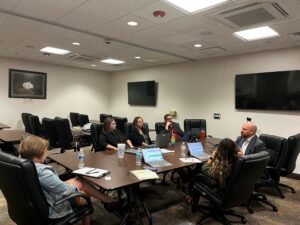 “Where are you going to find the entrepreneurs?” When the Ada Jobs Foundation brought people together to begin brainstorming how to help more scalable tech startups in our area, we found a lot of agreement about what programs seemed to work. Other communities had built incubators and accelerators, there were meetups and workshops, bustling cowork spaces and lots of great press releases about new investment and product launches. What we struggled to answer was the question about who would show up to these programs. Was anyone interested? How would they know? Where would we look?

From those meetings, an idea was hatched that we needed to draw on not just Ada, but Ada’s region of Southern Oklahoma. We thought that if there could be a network of people who could champion entrepreneurship, people who had the ear of their local communities, chambers of commerce, main street organizations, educators, city council members, then we might be able to expand our message and create more ways for people to access new programs. As we continued to talk, the group developed an idea for a leadership roundtable for the region, a group that could meet every quarter share information and discuss how we could build a region that would support new startups, innovation, and technology in Southern Oklahoma.

On Thursday, November 3rd, the Ada Jobs Foundation facilitated the first of these quarterly Startup Leadership Roundtable meetings at the Chickasaw Nation Community Center in Ardmore. The meetings are designed to cover a region that includes many different areas. As part of the Build to Scale Venture Challenge grant that the Ada Jobs Foundation received, the area served and affected extends beyond Ada to encompass ten counties: Pontotoc, Johnston, Murray, Coal, Atoka, Garvin, Carter, Love, Marshall, and Bryan. These ten counties are also located within the territory of the Chickasaw Nation which provides unique opportunities for partnership.

This outreach is important because in order to build a successful ecosystem supportive of scalable tech startups, it is necessary to extend beyond the boundaries of Ada. Rural areas obviously don’t have the same kind of population density as urban areas, but whenever we extend throughout rural Southern Oklahoma, it is easier to get the kind of numbers we need in order to find the entrepreneurs and innovators who are interested in creating scalable tech startups. Instead of looking at a dense central population, we are looking at an entire region that is capable of doing new and exciting things. This kind of outreach affects Ada, but also rural Oklahoma as a whole, which will affect our entire region in a positive way.

The inaugural Quarterly Roundtable, organized by the Ada Jobs Foundation Startup Community Manager Ashia Todd, included representatives from various organizations including Sandra Wesson and Melody Hagar from the Chickasaw Business Network, Andrea Anderson from the Ardmore Development Authority, Jim Lawson from Pontotoc Technology Center, Jake Cantrell and Cody Tucker, local entrepreneurs, and Jim Eldridge, Ashia Todd, Sunnie Baker, Daniel Castaneda, and Peggy Saunkeah from Ada Jobs Foundation. While this is a great group of individuals who work well together, one of the main focuses of this first roundtable was how to bring more people to the table for a greater impact.

While the first roundtable was in Ardmore, they are planning on having the next one, in February 2023, in Durant. It is important to change the location of the roundtable in order to bring more voices to the table in an attempt to reach as many communities as possible. While the first meeting was a planning session for future meetings, the group was excited about the potential for future meetings to be a showcase for local communities in the region and an opportunity to learn more about the small business resources available in each town and who is doing the work to support startups and technology in these areas.

Gathering a diverse group of voices together is crucial to this effort. While the Ada Jobs Foundation is an economic development organization, it is also important to get local chambers of commerce at the table, as well as educational institutions, tribal nations, investment firms, and successful entrepreneurs. All of these voices can help build a picture of the different communities and help the Ada Jobs Foundation plan workshops and events that would be helpful and significant to these future tech entrepreneurs. Ultimately, this group is a crucial first step in creating a network of rural communities who are proactive and supportive of new startups, innovators, and people working in technology fields. This is the foundation our area needs in order for new tech startups to thrive.