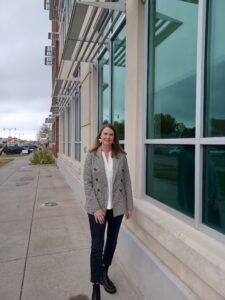 One of the major challenges with building a culture of tech-based entrepreneurship is finding the people to help us make this vision a reality as something that can happen in rural Oklahoma. We are lucky, though, to have such an ally in Dr. Stacey Bolin, Associate Professor in the Harland C. Stonecipher School of Business and Director of the Wilburn L. Smith Center for Entrepreneurship at East Central University. Not only is Bolin a champion for entrepreneurship education, but her background in technology positions her perfectly to help guide her students toward their goals.

Bolin grew up in a culture of rural entrepreneurship. Her family owned the local John Deere dealership, so she was raised in the heart of small business. When she graduated from Latta High School, Bolin went on to study at East Central University where she received two degrees—one in Finance and the other in Computer Science. 2000, the year she graduated, was an exciting time in the development of the internet, so Bolin decided to go the computer programming route, which she did for several years. While she found programming engaging, she was less than happy about sitting in a cubicle and working by herself. As Bolin says, “I like to be up and moving around and talking to people.” It was time for her to choose a different path.

Bolin applied to the full-time MBA program at the University of Oklahoma and was accepted. Upon graduation, Bolin came back to Ada to work in the family business which had expanded to include an ATV dealership as well. She and her husband started a new business and sold it, and she continued working for the John Deere dealership even after her parents had sold it. Then, however, in 2011, she began teaching at ECU. She began as an adjunct professor, then full time professor, who taught primarily in the computer science department. In 2013, when the new Chickasaw Business and Conference Center opened, new opportunities came with it, including the Wilburn L. Smith Center for Entrepreneurship, and a director position for Bolin.

While this was a great opportunity for Bolin, it was also a great opportunity for the many students who would come through her classes. ECU offers a Certificate in Entrepreneurship, and  three entrepreneurship-focused courses are taught by Bolin as she takes her student entrepreneurs through the processes that can lead them to future success. For Bolin’s entrepreneurship classes, it all begins with a mindset. While many people might define the entrepreneurial mindset in their own unique ways, for Bolin is boils down to the fact that “problems are opportunities.” She says, “We can’t solve problems thinking about them in the same way that we always have. Sometimes it takes a series of experiments to make something better. A lot of successful entrepreneurs didn’t invent something, they just figured out a way to make something better.”

As she takes her students through the courses, she also takes them on a journey to develop the critical thinking skills that go along with this entrepreneurial mindset. In the first course, the end goal is to identify opportunities and get it to proof of concept where they can determine if the idea is something worth moving forward with. However, she takes them through this process one step at a time, so it isn’t so overwhelming. Entrepreneurship can be risky, but, as Bolin puts it, “To the people on the outside looking in, they see this big giant risk, but really it is a whole bunch of little bitty ones. And as they develop confidence and experience, then the next risk might be a little bit bigger, but now they have experience behind them.”

In the second class Bolin teaches, they focus on moving from their ideas to more of the planning stage. This is where they learn how to write a business plan using curriculum provided by the Kauffman Foundation. Some students continue using their ideas from the first class, while others start from scratch, but that is also part of the lesson to be learned. Part of entrepreneurship is realizing that you must be flexible in your thinking and be willing to change course if necessary. Finally, in the third class her students are prepared to pitch their business ideas and have the opportunity to compete in the Innovation to Enterprise Love’s Cup.

The Love’s Cup, formerly known as the Governor’s Cup, is a statewide collegiate competition where students do market research, develop a business plan, and then make a presentation to potential investors. This is the perfect capstone to all the lessons that Bolin teaches in her classes. It gives the students the real-world experience needed to go out and do it on their own in the future, just in a controlled competition-based environment. The first year they competed, 2013, two teams made it to the finals and one of them won the Paulsen award, which is a $5,000 scholarship. This past year, they had four teams in the finals, including taking first and second place in the Small Business Division, the Pitch Winner, two Interview Winners, and another Paulsen award. In fact, since Bolin took her first team in 2013, ECU students have won a total of $160,000 in prize money.

While Bolin’s students come up with wonderful and creative solutions to problems that they see in the world, one area that has been a challenge has been tech-based entrepreneurship. Bolin thinks that part of the reason is because when they think about technology, they think about the tech giants because that is the technology that they are surrounded with. They aren’t used to seeing tech startups in rural areas and so it doesn’t come across their radar. However, one way that Bolin is trying to change this is by introducing her students to entrepreneurs who have started their own businesses that are tech based, but smaller. For instance, a software designer wanted her class to try out an entrepreneurial simulator software he had designed and, while the students are experimenting with it in class, they are also going to have a chance to talk to him over Zoom about his own entrepreneurial journey. Perhaps seeing the smaller possibilities that can eventually scale can help the students think about their own potential in a different way.

Another way to possibly help increase the amount of tech-based entrepreneurship is an exciting new development in the general education offerings at East Central University. For the first time ever, Introduction to Entrepreneurship will be counted as a general education course in the “Critical Thinking” section of requirements. This will give more students the opportunity to learn about entrepreneurship, especially when many might not even realize that this was an option. As more students from the science and technology majors learn about entrepreneurship, perhaps we will have more ideas for tech-based startups. Giving all students the chance to engage with the entrepreneurial mindset can broaden their perspectives and possibilities.

Bolin loves her classes, and she loves her students. Every class is varied and different, as the students bring new ideas to solve new problems they may have never even considered before Bolin’s class. While she is teaching students how to take their ideas from the tiniest seed to full bloom, she is also teaching them how to think and how to question. She never knows how many of her students will go on to start their own businesses, but she does know that they will leave her class with a new perspective and fresh eyes on the world around them.