A Case for Curiosity: Andrew Long and the Joys of a Technological Challenge 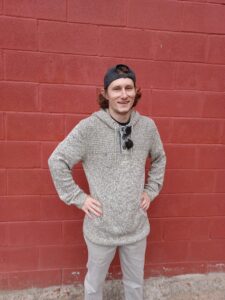 Andrew Long was eight years old when the family computer stopped working. It was a Gateway PC running Windows 95 that had everything bundled into a single machine, fans whirring behind the large, glowing cathode ray tube screen. Long, who had always had a burning curiosity for how things worked and was always taking things apart and putting them back together, asked his dad if he could try to fix it. The computer was already broken, so what harm could come of it? His dad agreed and let him try. These were the days before information was readily available via Google or YouTube tutorial videos, so he had to figure it out on his own. However, after taking it apart and deciphering how it worked, Long found the issue, fixed it, and the family computer ran for another 10 years. More valuable than the computer, though, was the fire ignited in Long. His curiosity had helped him solve a technological challenge and, at eight years old, he found his calling. Now, at age 30, Long is a tech entrepreneur and the 2022 winner of the Ada Jobs Foundation Big Pitch Competition.

Over the course of the next ten years, Long’s passion for computers grew. He got his first job in IT when he was 11 years old. His dad was pursuing a degree at ECU in education and Long would go with him in the summers. He would hang out in the computer lab while his dad went to classes. One day, they were upgrading all of the CPU’s and they asked Long to help. He had to open up all of the computers and flip switches on the mother boards. This was the first time he did something for an organization and he realized that this is also something that he could do for work when he grew up. While he didn’t get paid, he did gain experience, confidence, and a vision for the future.

When Long was a freshman in high school, his dad was teaching at Coalgate and having some computer issues. Instead of going to the IT department, he had his son fix it for him because he knew that he could. When the IT administrator found out, Long was called to her office. He was afraid he was in trouble, but this was far from the case. She offered him an internship. This gave him more varied and hands on experience working with individual computers, servers, and gave him a chance to learn about the infrastructure of a large computer network.

After graduating from Coalgate High School in 2010, Long gained even more experience in school, working for Dell and doing freelance work. It was through the course of these experiences that he realized that what he really wanted to do was work for himself. So, in 2017, Long cashed in his life savings and became a tech entrepreneur founding his first company, Chameleon Tech Services. While he knew everything there was to know about computers, Long says, “I went headfirst into it without knowing the first thing about running a business.” But just as he never gave up on a technological challenge, he was going to give up on this either; he was determined to make this work and, after about a year, he landed his first commercial client, Ray’s Travel Service in Ada, Oklahoma.

His business really started to take off, though, when he received a phone call from Jake Cantrell in 2019. Cantrell was getting rid of Cantrell Solutions and starting a software company. He and his father-in-law, Joe Sherbert, wanted to make sure that their clients were taken care of, so they reached out to Long, interviewed him, and then handed him 60 commercial clients. Since that day, Long’s clientele has grown to 276, spread out all through Southeastern Oklahoma.

At the beginning of 2022, though, Long decided it was time to make some changes and really focus on what he wants his business to be and where it is going in the future. He changed the name from Chameleon Tech Service to Long MSP. An MSP is a Managed Service Provider.  Long says, “It is a whole industry in and of itself. A lot of IT companies are calling themselves MSP’s now and that is basically full autonomy over a company’s IT and infrastructure.” One of the reasons for the change is for clarity; Long is focusing solely on commercial clients now. In the past, Long would also have residential clients, but this is something he is moving away from, though in the future he may add them back to his roster if he has a chance to open a physical storefront.

Since making the change to Long MSP, he has added more services related to cybersecurity, partnering with a Managed Detection and Response company to continually monitor the networks and systems that Long services. Long says, “In 2021, 37% of all businesses and organizations were hit by ransomware. Ransomware attacks cost businesses $1.85 million on average in 2021.” While cybersecurity has always been on his radar, one of his clients brought it to the forefront of his mind when they were hit with a ransom for $327,000. Long was able to restore their system, identify the threat, and prevent future threats. These cybersecurity measures are now included in all his service bundles. Long knows the importance of being flexible and forward thinking in the world of computers; as new technologies arise, and new threats and challenges with them, he and his business can change and adapt with them.

Looking toward the future, Long has big plans for 2023. He is planning on rolling out a new program called “Long MSP Lifecycle.” With this program, companies would have the option to lease their equipment from his company. If there were any issues with the hardware, he would be able to fix them, and every two or three years, he would replace the systems with newer equipment. This would cut down on costs for businesses in the long run and make good systems more accessible for new small businesses. As a small business owner, Long is aware of the challenges they face. He says, “If you’re a smaller business and don’t have a whole lot of capital, that’s a huge obstacle to overcome. This can help alleviate the burden of having to shell out thousands of dollars at a single time.”

In addition to his Lifecycle program, in 2023 Long also plans on hosting cybersecurity seminars for businesses and organizations. Long says, “Most of the cases where companies get hit by cybersecurity attacks are due to the end users not being properly trained and educated on what to look out for and that’s most of the cases where data ends up getting compromised.” While most people might know not to open links from email addresses they don’t recognize, the scammers are getting smarter and more sophisticated. That is where Long’s seminar and training programs will help; he can teach his clients how to be smarter and more sophisticated themselves and hopefully lesson the burden of cyberattacks on their organizations.

One of the lessons that Long learned during the pandemic is that he can do a lot of his MSP work remotely, from the comfort of his rural home in Coalgate. While sometimes it is necessary to go to a business, especially if there is a hardware issue or if new systems are being installed, the majority of what he does can be done at home. He can connect to his clients’ systems, monitor them, and fix them, without any disruption to the business. Long says, “The ultimate goals is to make their lives easier, make their technology work better for them, and mitigate downtime and problems as much as possible without having to break the bank.” Long wouldn’t want to do anything else. Every day is different, and every day is a challenge. But he approaches all of these challenges with the excitement of an eight-year-old boy, taking apart his first computer, to see what makes it work and how to make it work better.